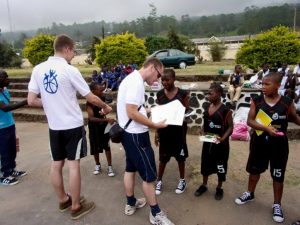 On the 20th of December 2014 the first Basketball for Development Olympic Games took place at Buea/Cameroon. On initiative of coach Efon Elad Constantine and Tillmann Repp a day of games all around basketball was designed and important social and health topics such as the content of previous Dunking-AIDS-Out Seminars were integratet.

Teams from all over Buea, for the first time also Kids from the Mountain Kids Orphanage participated. During the tournament all team awarded fair play point to the competing teams and at the end of the tournament the Fair-Play Price was awarded to the fairest team.